How NOT to Create an Effective Marketing Strategy

Why You Need Targeted Landing Pages

Receive an email when we publish a new post

It’s a well-known fact in marketing that “storytelling” is one of the most effective ways to get your point across and make a lasting impression on your target audience. For a while there—at least on the Internet—the fashion moved away from this subtle art in favor of “Top Ten Lists,” “How To” articles, and other such mind-numbing pieces of drivel. (I should know, I wrote a few of them.)

Now the trend is swinging back towards spinning a good yarn. The glut of information has pushed readers to crave a good story more than ever.

That said, the Information Age has inflicted some lasting damage to our attention spans. Yes, people want a story, but now they aren’t willing to invest hours, or even very many minutes, to take it in. So we have to learn how to distill the narrative down to its most essential elements.

This reminds me of the legend of Ernest Hemingway’s short story contest. According to popular accounts, Papa wagered a group of fellow writers ten dollars each that he could craft an entire novel in just six words. After the money was collected, Hemingway scribbled on a cocktail napkin: 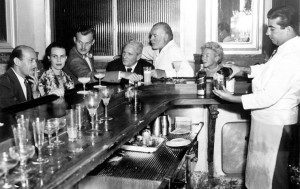 He passed the napkin around the table and (smugly, I imagine) collected his winnings.

What can you and I learn from this tale? Plainly put, we need to be aggressive in editing our own content. OK, only six words might be a little extreme, but you get the point.

Look for ways to rework sentences into simpler words and shorter phrases. Reduce the number of adjectives, use action verbs, lose the passive voice, and for goodness sake, kill any adverb that tries to weasel its way onto your page.

“I would have written you a shorter letter, but I did not have the time.” #editing #writers Click To Tweet

This quote has been credited to various writers, and Hemingway is certainly among them. (Although the consensus is Blaise Pascal.) It underscores the effort involved in crafting a piece of written content instead of just letting it spew from your consciousness to your fingertips.

Tools to Help You Write Better

This is all standard writing advice, and you’ve probably heard it before. Indeed, we all know that we should do these things, and yet it’s so difficult to put the advice into action.

As luck would have it, that icon of American storytelling is here to help from beyond the grave. Sort of. In spirit, anyway. The task of writing like Ernest has been made easier by an online app created in the great writer’s memory.

As the tagline says, The Hemingway App was designed to help you “write bold and clear.” It looks for better ways to phrase your sentences, and of course make the whole thing shorter and to the point. It’s awesome, and intuitive—and almost creepy. It lets you know when a phrase has a simpler alternative, and instructs you to remove all adverbs. Or else.

The app is free to use online, or you can download the desktop version for just $9.99.

There’s another app that isn’t as fun, but is even more versatile. It’s called Grammarly, and I HIGHLY recommend it. This little tool saves me from embarrassing myself almost every day. It checks for mistakes of spelling, punctuation, and as the name suggests, also grammar. You’ll be surprised how often it catches you. And teaches you! After making the same mistake a few times, I always feel like I want to “outsmart” the app by being more careful the next time.

Another nice feature of this app is that it integrates with everything on your computer. Any time you do any typing, whether in WordPress, on your Facebook Page, Microsoft Word, Gmail, whatever—the app is always there looking over your shoulder just like your eighth grade English teacher.

Grammarly offers both a free version and an upgraded version. I used the free one for a while, but came to realize that I really needed the extra power of the full version, since I write so much every day. I noticed that towards the end of the day, as my brain wears down, this app really keeps me from making a mess of things.

Oh, and it can also check for plagiarism on the Internet.

So that’s all you have to do; implement these two little apps and you’ll be writing like Ernest in no time. Start preparing your Pulitzer Prize acceptance speech now.

How NOT to Create an Effective Marketing Strategy

Why You Need Targeted Landing Pages

This site uses Akismet to reduce spam. Learn how your comment data is processed.

Let Us Give You A FREE Estimate

Let's talk about ways to get the most out of your digital presence. No cost or obligation.